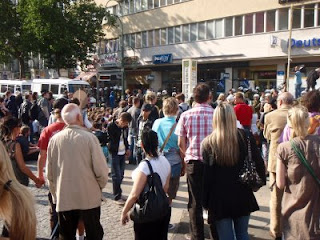 I was not really going to have much to report today about Berlin since I spent most of it indoors with various folks (member of parliament, ministry of foreign affairs, think tankers). But things got interesting as soon as I stepped out of the U-Bahn stop.

Students were sitting on the ground, chanting, apparently about the lack of higher education funding, surrounded by heaps and heaps of riot control types (you can see the white helmets). Given that riot control is one of the kinds of activities that many countries in the NATO mission in Afghanistan seek to avoid--a 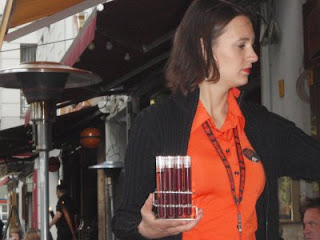 caveat that I have been asking about, it was quite (alternative word for ironic inserted here).

The other youths I encountered were shilling for Jaggermeister--giving out leis (quite German), pics with the female sales-youths, and shots of Jaggermeister. I would have been a poor guest in Berlin to refuse. Not too shabby.

Perhaps it is the shot of Jagger, but MTV Germany is beginning to freak me out. First, Geri Haliwell (a spice girl, I suppose) sang Raining Men and danced around the school where Fame was set or probably danced around the Fame set. Then MTV-G plays Country Road, sang by people I don't recognize, but with the western set (West Virginia is not the West!?) featuring the "Bank of Lubbock."

Two other features of Berlin--Beer plus soda--I had a beer with sprite mixed in and it was pretty tasty; and mullets. Saw several young males who were rocking the mullet. If the conflicting interviews about Germany's civil-military dynamics were not confusing enough, the Jagger, the sprite-beer, and the mullets definitely have played with my head.
Posted by Steve Saideman at 1:58 PM