Ok, just fictional ones played by real ones (although see this cracked on myths about women being the less aggressive gender):

Well, Don and Megan, sitting in a tree?  No, but Megan was not as much a target of Don's advances as vice versa.  She just wanted one night with him.  Oh sure, let's see how their work relationship goes on when Faye sticks around.  And Megan must have known about Faye being Don's girlfriend, unless she is even more naive than we thought.

Anyhow, this episode had a lot packed in again: Pete and his imminent baby plus a temptation to join another firm; Joan finally shutting the door on Roger and Roger completely lost; Peggy just rocking her world; Don being Don; and a small insight into Ken's life with Satan as his father-in-law--the always wonderful Ray Wise. 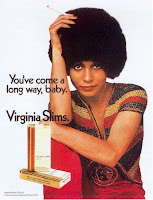 Every time we see Peggy this season, we cannot help but thing "You've come a long way, baby."  She beds the previously dimwitted Abe not once but twice (seems like Jewish folks are getting all the action in this show--Faye and her punnum comment).  And then she escapes Stan when I was almost afraid of another office rape scene.  Then laughs off his deliberate non-warning about her lipstick after she does a great job with the Playtex people.  Just another terrific outing for the character and the actor.

Alan Sepinwall is correct--that as much as you want to hate Roger after this episode, John Slatterly makes him still likable.  This is not easy to do, given the list of offenses.  Roger did not tell his colleagues so the time they might have had to deal with the problem was wasted.  He then was really tough on Joan, as she repeatedly turned him down.  At least, he finally got it.  And then he goes home to his beautiful but clueless wife, who does seem to love him, and just demonstrates that he only likes other people's toys.  Once he has them, he gets bored.

Pete faces a big temptation himself.  At least Ted seemed to be there to woo Pete, rather than steal his account.  Not a huge improvement (what a sleeze), but Pete definitely could use the boost after getting bopped around by Don and by his father-in-law.  At least Don defended Pete in the contentious meeting with Roger, so perhaps Pete will remember that.  But Pete could easily leave.  Hard to imagine for the show to lose a key part of its universe, although Matthew Weiner has not been shy about that before.

Don is on the edge, drinking and womanizing, but with moderation if that makes any sense.  He asks the women in his life to monitor his drinking, and that is a big step.  Not so much the monitoring of the drinking but asking for help.  And he was not the aggressor with Megan, which is a bit of a difference than in the past, although he could have put her off if he felt like it.  His protests were weak.  But he did try to play it reasonably straight with her.  Whether that sticks is another thing, as it is hard to tell whether Megan is cynical enough to separate business and pleasure or just, as I suggested above, naive.  Or a stalker?  We really, as she notes, do not know much about her, aside that she is a Montrealer coming to NY for its art scene.  I guess that is simpler than discussing the Quiet Revolution in Quebec.

Anyhow, Don seems to be confronting the various crises reasonable well, especially is work with Peggy, with one exception--Faye.  He demands that she break her ethics as he is quite desperate.  He had not asked before.  And then when she caves to hand in Heinz (that would be a nice replacement for Lucky Strikes), he realizes that he should not have asked.  Is this passive aggression or really learning that what he did was wrong?  Probably a bit of both.  But it compromised Faye and their relationship.  This relationship has already lasted longer than we had expected.

So, we have two episodes left.  What should we expect?  I have no clue, except that Heinz probably will save the firm because the show must keep many (if not all) of these people together.  Don is not making a miracle recovery, but I doubt that the season will end with him in jail or in a drunk-driving accident.  If they get Heinz, Pete sticks around as he will be needed to keep that account in line.  Peggy will continue her path on coming a long way.  Joan, despite some doubters, probably is no longer pregnant but will have to grapple with her husband's plight in Vietnam.  In terms of the big world event that ends the season (a la the 1960 election, Kennedy's assassination, etc), possibilities include the first major intense attacks in Vietnam in October and November (including the Battle of Ia Drang as 'documented' in We Were Soldiers),  the Northeast Blackout,  of 1965,  the first big Vietnam protests, and A Charlie Brown Christmas.  My guess, of course, is Vietnam.
Posted by Steve Saideman at 7:14 AM