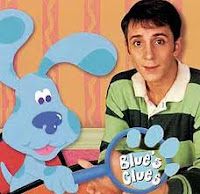 When my daughter was much younger, we watched a heap of Blue's Clues.  It was far more fun and less annoying than Barney.  The host at the time was a guy/character named Steve.  He was incredibly engaging, and got the part according to the wiki page because he was the "realest" to the test kids.


As Dr. Alice Wilder, Nickelodeon's Director of Research and Development, said, "There was just something about this kid, who was fresh out of Pennsylvania, who just knew where to look in the camera to really talk to kids. He was just right."

Which perhaps explains why he kept saying "for real" during his recent Moth podcast story.  While the tale he told was not entirely safe for work, I shared it with my daughter as she does remember Steve and Blue's Clues quite fondly, and the story was most excellent.

Steve now has a band--Steve Burns and the Struggle.  He even has a few videos on his myspace page, including this one, which made me burst out laughing within five seconds:


And so this great Steve has reminded me yet again not just of my daughter's childhood but of the great boon that is the internet.
Posted by Steve Saideman at 8:31 AM