Everything Reduced But the Fun 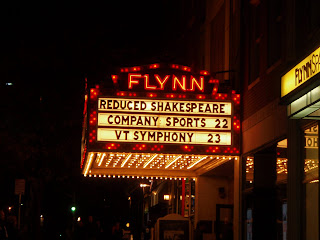 The Spew kid and I drove down to Burlington, VT yesterday to see the Reduced Shakespeare Company's Complete World of Sports Abridged.  My wife and I became fans of the RSC a long time ago, and saw their American History show while we were living in Virginia.
Our daughter has picked up our love for this wacky trio (the company has several sets of trios that go out and perform their various plays), re-watching a DVD of their original show--all of Shakespeare's works in ninety minutes.  She even used their book on Shakespeare for a class project a couple of years ago. We also download their podcasts (available on iTunes), which not only promote the RSC but also educate us about the realities of the theater life.  I never had the guts to follow my love of acting (unless you include my lectures to 600 students), and these podcasts inform me that I probably made the right choice.
The challenge is that the RSC has not been to Montreal in quite some time, so when we heard they were taking their newest show to Burlington, we grabbed some tickets and hopped on the highway.

We were not disappointed. The show was very, very entertaining, covering sports on all continents (yes, Antarctica too, although that was an obvious reach) and over history.  They did omit ultimate frisbee, but I will forgive them for that due to their depiction of "Extreme Curling."  The pace and the energy was pretty amazing.  They skewered sports broadcasting as well as the sports being covered.  The coach had a book of coach clichés.  I guess my favorite bit was when the athlete was doing the promo for the United Way and happened to mention his required 500 hours of community service and the Palin School for Wayward Girls.

The show, as they always say, is not ad-libbed but very much written down.  Well, except for the Vermont references and the moment where Austin Tichenor lost it.  The crowd loved it, especially when they were teased for being a lousy audience.  Definitely worth the drive down, especially since we were able to buy their DVD of the American History show and get it signed.  What could be more fun than a night of silly intellectuals with heaps of physical comedy and one pretty impressive fight song (or three?)?
Posted by Steve Saideman at 10:03 AM

i totally agreed with you. i actually drove to Burlington from Champlain, NY, just to see the RSC. and it was definitely worth the drive! great job and will be on the lookout for more RSC theatre and news in the future!