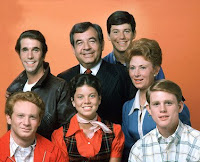 With the passing of Tom Bosley, I pondered with my family about the changes in TV.  Mr. C was the ideal and iconic father of the 1970s (yes, the show was set in the 1950's, but you know what I mean).  We have several contenders for the 1960's, but I would choose Mr. Brady--so many kids, so many problems, so many haircuts.  Bill Cosby's character is such an obvious choice for the 1980's.  It gets harder in the 1990's, but I would choose John Goodman's character in Roseanne.  But what about since then?  Which father is the one that is seen as both ideal and iconic for the Aughts?  Tony Soprano is clearly an iconic father, but hardly ideal.  Ray of Everybody Loves Raymond was on a popular show, but did anyone see him as being a positive and widely appreciated dad?  Freaks and Geeks was way too underviewed and ran too short for Joe Flaherty's character to make it.


Two things happened in the past 10 years or so: TV fragmented and family sitcoms largely disappeared.  We have so many more channels and programs that no one show will be nearly as influential as the Brady Bunch, Happy Days or Roseanne were.  Plus the popular comedies are relationship shows (Friends, How I Met Your Mother) or workplace comedies (The Office, 30 Rock), not family sitcoms.  Perhaps we will have more in the Teens with Modern Family and its imitators.  Of course, which father is most likely to be an icon in Modern Family?  Probably Cam!  Wouldn't that be something--a gay man as the iconic father!

So, I ask the readers, who is your favorite TV father of the Aughts?
Posted by Steve Saideman at 7:19 PM

Well it's not Don Draper or Roger Stirling, that's for sure!!! I vote for Phil Dunphy from Modern Family (though I do love the Cam man ...)

Well, That 70s Show was a direct and self-conscious Happy Days analogue-- set 20-odd years before it was shown, with a primary nuclear family plus sundry others. And Red Foreman was for a good long while the only non-doofus father figure on a regular family sitcom, the only one who regularly did know better than his kids. But he wasn't an iconic ideal (though I'd say that neither was John Goodman's character).

Part of your shift-over-time is just the rebellion against any father knowing best, and the shift to Bart-Homer dynamics-- smart-ass kids and goofball-or-worse dads. The Simpsons and Roseanne were both understood early on as counter-Cosby-shows, and they succeeded in mostly redefining family sitcoms away from that model.

I had forgotten about Red, who very much is the kind of TV dad I was thinking of.

And I concur on the smart-ass change. I do think the fragmentation of TV has a lot to do with it as well since we have few shows that make a huge impact these days.

So, I guess Red fits about as well as we can get these days.

1) I know he's know Mr. C., but damn do I love Phil Dunphy.
2) Don't forget how much of the reputation of those shows you mentioned was made through syndication. I never saw a single Brady Bunch when it first aired, but it was among the favorite shows of my youth. I did watch original Happy Days, but ended up watching it far more in afternoon re-runs.