Heaps of deja vu lately.  This time, it was a piece in Wired about the shopping opportunities at the Pentagon.  It is a nicely snarky piece.  To be clear, there are good reasons to have some shopping opportunities in the building.  Why?  Because it is a damned big building, making it had to duck out and run errands, and because the folks there work long, long hours.  They try to sneak in some errands or some exercise sometime during the day after arriving perhaps around 6am and leaving around 6 pm (we worked half-days--a lame joke).

So, let me run through Ackerman's tour of the building with some of my own experiences in mind: 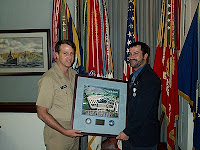 The photo essay missed the travel agency, the bank, and a few other shops that I am trying to remember.
Posted by Steve Saideman at 9:35 AM