What the heck!  No one will check at the end of the year to see if I was right about any of my predictions.  So, what do I expect in 2012 for myself, for poli sci, for civil-military dynamics, for civil war and ethnic conflict, for tv and movies?  Hmmm, tall order. 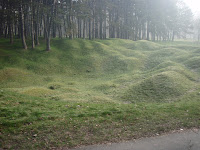 Email ThisBlogThis!Share to TwitterShare to FacebookShare to Pinterest
Labels: predictions