Stuff flying over Pakistan has been a recurring theme of late.  Of course, the focus has been on drones.  So, let me briefly address one point on those before moving to helos.


Drones, by their very nature in 2012, are easy to shoot down.  They move slowly .... mostly in circles.*  Pakistan has an air force (Libya could not shoot down the drones after having its air force and air defenses destroyed), and has shown in the past that they could shoot down Soviet fighters.  A flying lawnmower would be easy pickings.  So, if Pakistan's military really objected to the drone strikes, the US would not be striking via drones over-flying Pakistan, at least not for long.  The real questions are whether the civilians in the government understand this and whether they have control over the military.  Seems to me that Pakistani leaders are playing the same double game that Karzai is--blaming the outsiders while relying on them.  I am not an expert on drones, on Pakistan, or on drones over Pakistan, but I do think some basic logic applies here.


*  Yes, some secret ones may fly faster, higher or more stealthily, but the coverage of the drone strikes seems to make it clear that most of the drones flying over Pakistan these days are fairly ordinary and extremely vulnerable. [update: see this explainer for details for why I am mostly but not entirely correct] 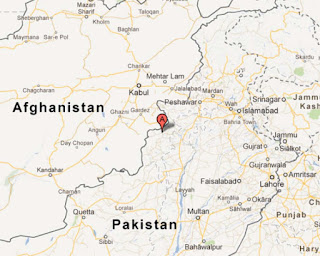 Ok, onto helicopters.  There is a story that NATO helicopters overflew North Waziristan. I found it strange that the helos were described as NATO.  Who else would have helos in the area besides the US?  This part of Pakistan neighbors the sectors of Afghanistan that are American Areas of Responsibility [AOR].  The handy dandy ISAF placemat makes this pretty clear.  The Poles, the non-Americans closest to this area, do have helos (or at least did), but would have to overfly an entire province beyond their AOR.  Plus many countries operating in Afghanistan have rules that make sure that they do not get too close to the border, so flying into North Waziristan would be most unlikely and unlucky.  So, if you had to bet, bet on these helos being Americans, but I doubt Vegas would give you decent odds.
Posted by Steve Saideman at 8:22 AM