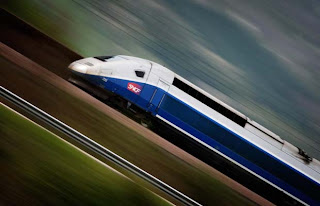 The Montreal Gazette has a series of articles on whether Canada should invest in fast trains between the various cities of the country. The outlay would be very, very expensive, but there are plenty of arguments to be had in terms of the environment and congestion and the like. Coincidentally, the NY Times has a similar set of stories running on a weekly basis, including one today that provides the math that suggests that in terms of money alone (without considering congestion and environmental factors), the trains are not worth it.

I look forward to the rest of the NY Times series to see how the math looks after congestion and environmental factors are built in. But I have my doubts. I like the idea, but public infrastructure construction, at least in Quebec, seems to be a situation where estimates of costs need to be quadrupled before starting. Moreover, in both the US and Canada, existing infrastructure is in incredibly crappy shape that the money should go there first--water, electricity, roads, existing mass transit, etc. It drives me crazy that the Mayor of Montreal is pushing for a tram system at a time where the metro and suburban rail system desperately need upgrades.

But upgrades are not flashy, big projects. And apparently the key to "leading" and "governing" is to have flair and panache. I wish we should just give the Mayor the little pins the waiters and waitresses get to wear at TGIF type restaurants (see the move Office Space with Jennifer Anniston as the flair-bearer for an example). If we can give the Mayor a bit of tin to wear proudly on his chest, maybe he will not waste billions of money on secondary projects. Or not.
Posted by Steve Saideman at 7:48 AM