Movie of the Summer of the Week: District 9 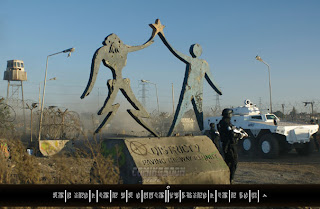 The buzz/hype was on target with District 9. It was a very well-made movie with amazing special effects, a pretty blunt metaphor that could apply not just to South Africa but to many other ethnic conflicts around the world, and excellent writing/directing.

The role played by a private military corporation (all the rage in both Iraq and the civil-military relations literature) was quite appropriate given the notable examples of South African PMCs elsewhere.

No spoilers here yet, but some questions do arise:
Run to your nearest theatre and see this movie. It may not be the best movie of the summer, but it is certainly in the conversation. Glad I made my family go to D-9 rather than GI Joe!
Posted by Steve Saideman at 3:59 PM