Should We Shoot the Confused Messenger?

I participated in a panel last night organized by the Canada Afghanistan Solidarity Committee.  This group is lobbying for Canada to stick around past the 2011 deadline and invited me due to my stance as espoused in a recent op-ed.  Much frustration was vented at the failure of the Canadian media to portray the Afghanistan situation  more positively.  There is a sense that Canadians are confused, and would be less so with more information.

There is something to this, as I have posted several times about myths about the mission and the country (here, here and here).  However, the media faces some severe constraints: 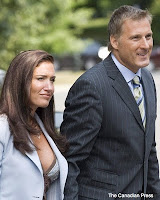 So, we ought not to blaming the messenger too much, even if they are pre-occupied with the bloodier side of things.  The Canadian public is not the only one with mixed opinions about the effort.  It is hard to find a public that is not confused about this mission.  Obama took all fall to figure it out and he had heaps and heaps of information.  Indeed, the more you know about this situation, the more confusing it may actually be.  So, getting more media attention on Afghanistan may not actually help out the CASC in their lobbying efforts.

Instead, the best option may be to take advantage of the frozen status quo in CA politics.  Harper cannot win a majority, but he is unlikely to lose his status as PM of a minority government given how inept the Liberals have been.  So, ironically, Harper may have more room to maneuver now.  What he does with that room?  Probably not much.
Posted by Steve Saideman at 10:56 AM