the causes are partly linked to experience. Demographically, younger and older Americans grew up in vastly different worlds. Those born after the civil rights era lived in a country of high rates of legal and illegal immigration. In their neighborhoods and schools, the presence of immigrants was as hard to miss as a Starbucks today. In contrast, baby boomers and older Americans — even those who fought for integration — came of age in one of the most homogenous moments in the country’s history. 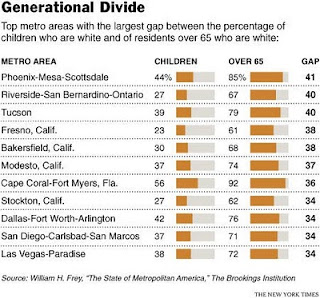 The stats suggest that the old folks are the exception and not the rule of American history--that immigration was historically low during the middle of the 20th century, but that the folks since then have experienced America like it was before the Great Depression.  The piece has a nifty table of the differences:

Why is this so political?


“Short term, politically, the age divide heightens polarization,” Mr. Suro said “Long term,” he added, “there’s the challenge of whether older citizens will pay for the education of the children of immigrants."

Well, given that old folks don't like paying for anyone's education (see heaps of votes in school districts where the folks whose kids have been educated there vote against taxes and spending for the kids who are still of school age), this is not terribly surprising.


It is not surprising but is encouraging that the kids are more tolerant--that interactions are breeding familiarity but not contempt.  This is the second piece I have read this week that suggests that the younger folks are more "liberal" in the sense of living and let live, of having values that accommodate and embrace.  The other piece I am still reading (very long) on American Jews and Israel, where the split is also between younger folks who are readier to criticize Israel when it betrays the liberal values it once espoused and that are central to the American and American Jewish experiences.

Nice to see some positive trends for a change, even if the generalizations are perhaps too broad.


http://www.nybooks.com/articles/archives/2010/jun/10/failure-american-jewish-establishment/?page=2
Posted by Steve Saideman at 9:31 AM